Who’s Harder to Buy Gifts for, Men or Women? It Depends!

A new study looks to understand the complexity of gift giving across genders.

At a recent dinner, my colleagues and I got into a debate about who is easier to give gifts to, men or women? There were strong opinions on both sides. On the one hand, as a colleague argued, there are many prototypical gifts for women, such as jewelry, clothing, and accessories, that make women easy to shop for. On the other hand, another colleague said, men appear to be less picky about what they want and are just as happy with a new baseball cap as they would be with something more personal.

Despite the overt gender stereotyping — and by a group of social psychologists nonetheless! — the question was an interesting one. But rather than just guessing or buying in to traditional stereotypes about what men and women may or may not want, I decided to investigate the question a bit more seriously.

Jeff Galak Ph.D., is an associate professor of marketing at Carnegie Mellon University’s Tepper School of Business. His expertise is in consumer behavior, consumer psychology, judgment and decision making, and research methodology. He has published in journals including Psychological Science, the Journal of Personality and Social Psychology, the Journal of Experimental Psychology.

To that end, I enlisted the help of about 200 participants. I asked these individuals were asked to imagine a close friend, and to write down three gifts that they thought this friend would like to receive. I then recorded how long it took them to come up with three gift ideas, and used this as a proxy of how hard it is to come up with good gift ideas in general. Of course, I also recorded the gender of the gift giver and the gender of the friend that was being considered. The results were quite surprising: 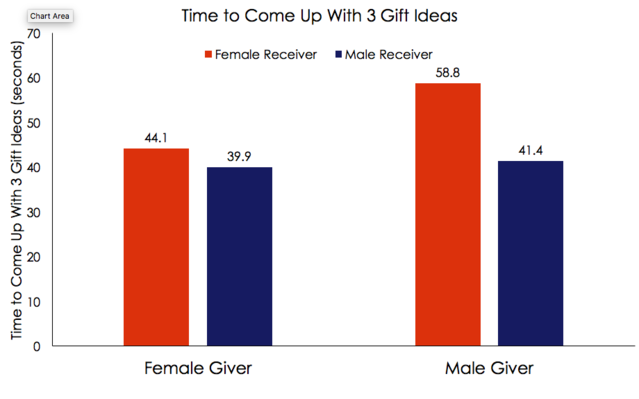 In other words, men are clearly easier to shop for in general — both men and women found it relatively easy to do so — but women are much harder to shop for…if the person doing the shopping is a man.

Of course, this one small study doesn’t tell the whole story. For instance, one of the other questions posed at this dinner was whether the price of the gift mattered. That is, maybe it’s easier to buy inexpensive gifts for men than for women, but the opposite could be true for expensive gifts. In this same study, I also varied whether people were asked to consider gifts that cost between $0 and $100, or gifts that cost between $100 and $1,000. It turns out this didn’t matter at all: Regardless of the cost, men found it hard to shop for women, but that’s it.

Another interesting question is the types of gifts men and women choose to give to one another. Since I did ask people to write down the specific gifts they were considering, I plan to look at this exact question next (and share the results in a future post).

In short, if you’re shopping for a man, consider yourself lucky. Regardless of who you are, the task should be reasonably straightforward. But you’re in the position of being a man shopping for a woman, be prepared for a difficult challenge.