The Role of ‘One-Sided Sex’ in Relationships

The pros and cons of being there for each other, no matter what.

"The big difference between  Brendan Francissex for money and sex for free is that sex for money usually costs less." —

“I have sex with my husband in order to maintain industrial peace in the home, but all my emotional resources are focused on my lover.” — A married woman

Industrial peace is characterized as a state in which an employer and employees abstain from industrial actions, such as strikes and lockouts. In the same vein, we can discuss industrial peace in marriage or other long-term committed relationships as a state in which both partners abstain from sexual sanctions, such as sexual deprivation or frequent “headaches.” The purpose of this type of “peace” is to ensure an ongoing, smooth relationship in which the two parties decide to stay together even in the absence of profound love or intense passion.

Aaron Ben-Zeév, Ph.D., is Professor of Philosophy at the University of Haifa and former President of the University (2004 – 2012). His research focuses on theoretical issues concerning the emotions, as well as the study of particular emotions. His major books are The Subtlety of Emotions (MIT, 2000), Love Online: Emotions on the Internet (Cambridge UP, 2004), In The Name of Love: Romantic ideology and its victims (With R. Goussinsky, Oxford UP, 2008); The Perceptual System (Peter Lang, 1993); and Die Logik der Gefühle: Kritik der emotionalen Intelligenz (Suhrkamp, 2009)

The value of industrial peace in organizations is clear: The employer and employee often have common interests and goals and can fulfill them without necessarily liking each other.

In marriage, the partners also have common interests and goals. They can try to fulfill these without being profoundly in love or feeling intensely passionate toward each other. If they decide that the show must go on, they need to find a way to peacefully coexist in which they both benefit—even if there's a lack of passion. However, such peace has its emotional costs. A married woman who regularly engages in peace-inducing sex said, “After I check sex off my "to-do list," I feel bad about trading sex for this peace. I never talk about this with my husband.”

“There is love, of course. And then there's life, its enemy.” — Jean Anouilh

In life we cannot have everything we want and must compromise by settling for situations that seem relatively close to our ideals, or the closest we can get given our circumstances. Compromises involve dissatisfied acceptance of a gap between a perceived feasible desire and our actual situation. In a compromise, we are in a situation we have chosen to be in, but which we prefer to be different. Our choice stems from the fact that we are limited creatures, that we cannot always meet our norms or achieve our ideals, and that we sometimes have to settle for something less than we might want.

In romantic compromise, we give up a romantic value, such as passionate love, in exchange for a non-romantic value, like the wish to live comfortably without financial worries. Giving up a romantic option is no small matter; the forsaken alternative might cast a lingering shadow over our lives. Our awareness of the road not taken can remain part and parcel of our lives, and sometimes this awareness becomes more oppressive as time passes.

In preferring life over love, people make romantic compromises; after all, there are very few, if any, people who are perfect. The debatable issue concerns more specific aspects of the compromise, and in particular whether the long-term feeling of being romantically compromised disappears or decreases. In order for the decision to be viable, it should enhance the agent's flourishing in general and his or her romantic flourishing in particular.

"Men reach their sexual peak at 18. Women reach theirs at 35. Do you get the feeling that God is playing a practical joke?" — Rita Rudner

The issue of reciprocity is central to romantic love. For both sexes, mutual attraction is the most highly valued characteristic in a potential mate. The lack of reciprocity—the knowledge that you are not loved by your beloved—usually leads to a decrease in the degree of love and ultimately to humiliation and breakup. However, one-sided (unrequited) love also exists in ongoing relationships. Even more common is the presence of unequal romantic involvement between partners—for example, when you are in love with your partner but the partner does not love you as much.

Unequal involvement is often expressed in the sexual domain, although different degrees of sexual arousal are not necessarily related to lesser love but may stem from various personal and contextual circumstances. In some relationships, one partner might not be sexually attracted to the other, or might have a lower degree of sexual desire. One fairly common option in these circumstances is to allow the partner to find sexual satisfaction outside the relationship.

Generally, one-sided love constitutes greater difficulties than one-sided sex, as it affects more aspects of a couple's life. I focus here only on the issue of one-sided sex.

“I would say my sex drive is about zero right now. Last night we had sex. I couldn’t wait for it to be over. Even kissing made me nauseous.” — A woman after having "pity-sex"

We can discern three major types of sexual interactions based upon the motivations of agents who are not sexually attracted to their partners: pity sex; charity sex; and peace-inducing sex.

Pity sex happens when people have sex with other people because they feel sorry for them. Pity (or mercy) sex is an experience in which a woman (or a man) is not particularly attracted to someone who is in love with her and wishes to have sex with her; she sleeps with him because she feels sorry for him. Like a one-night stand, pity sex is usually an isolated occurrence; unlike a one-night stand, pity sex has an altruistic element, intended to give pleasure to the other person but not to the one who pities—after all, pity is not a pleasant emotion. Many people (women probably more so) may have sex because they think they “should" rather than because they actually want to. This can be a kind of guilt-induced sex. (See here.)

Charity sex is common in ongoing relationships that have lasted for a while, and usually occurs in an effort to maintain or enhance the relationship. It can be regarded as a kind of investment in the relationship; like other investments, you might not see the benefits immediately, but you increase the prospects of reaping benefits in the future. Charity sex typically occurs in a situation of profound love, in which the sexual aspect has significantly diminished over time. In charity sex, you love your partner, but don't feel like having sex with him or her. It might not be enjoyable, but it typically does not involve suffering. In pity sex, the pitying partner does not want to have sex with the one she pities because she is not physically attracted to him. In charity sex, you usually find your partner attractive and generally enjoy having sex with him, but at this specific time you do not feel like having sex. Nevertheless, you consent, as you believe your partner wishes it or will benefit from it—for instance, because he is feeling somewhat low and sex will improve his mood.

Consider this table summarizing the main elements of each type of one-sided sex. 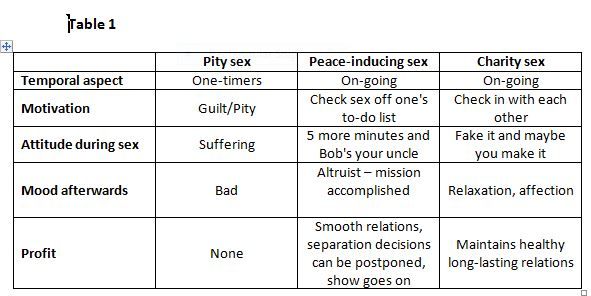 In all types of one-sided sex, whether pity, charity, or peace-inducing, the sexual interaction is intended to meet the needs of another person, but in charity sex it takes place in a more positive atmosphere. Without doubt, it is better to have enjoyable, reciprocal sexual experiences, but one-sided types of sex can have limited value in certain circumstances.

A surprising treatment for chronic pain I have a small cohort of patients who suffer chronic pain so intense and unremitting it prevents ...
Read more »

Failure Can Become Freedom: 5 Tips for Overcoming Impulsivity Losing your fear of failure can be very freeing. Being failure phobic can lead ...
Read more »

Talking to Kids About Teen Smoking: How to Do It Right

If you know the rules, you can help teens stop smoking Newsflash: Kids don't like being preached to - especially when ...
Read more »

How eating well can increase performance and happiness. The question of what can make a healthy commitment to something like a ...
Read more »